Home Concerts Måns & Per Andersson together for the Christmas Show of the Year.
ConcertsEventsTomten och Bocken

Måns & Per Andersson together for the Christmas Show of the Year.

This year Christmas will be celebrated with a lot of music and laughs! When this year we missed entertainment and live music and when we need it more than ever, Måns Zelmerlöw and Per Andersson save Christmas and the end of 2020 with their Christmas show – Tomten & Bocken – En slags Julshow. 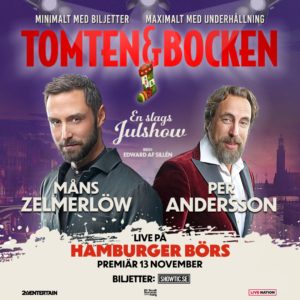 Tomten can be both a Christmas creature which can be related to the Christmas elves but also Santa Klaus and Bocken, a Christmas symbol in Scandinavia that which can be translated by Christmas goat. En Slags Julshow, « kind of a Christmas show » in which we can detect some form of humour with a crazy funny show around Christmas theme.

After Måns’ big success with fifteen sold out evenings of his Grand Wonderland Show at Grand Hôtel in Stockholm last year, he comes back for a new Christmas Show this time together with Per Andersson with who he already performed on stage for several famous swedish TV show such as Allsång På Skansen or Så Ska Det Låta where, last spring, they performed Stad I Ljus singing one sentence each. After the show has been broadcast they received good comments from their performance. Both Måns and Per say they have a lot of fun on stage together and they always wanted to perforum together – which is time now with Tomten & Bocken – En Slags Julshow.

Some of my best moments on TV have been with Per and I have always wanted to come up with something and more scene with him. When we did Så Ska Det Låta this spring, we got such a good response that we started to think on what it could be. It was Tomten & Bocken – hopefully the first of several performances together.

Måns explains about how the show first was born. Per Andersson goes on with some details:

Ever since Måns and I did Så Ska Det Låta for the first time, people have asked: should you not do something together? I want to see something with you two! And we’ve talked about getting it and now that there’s time and the craving for games is at its greatest, it’s finally time! When I broke into Mån’s wedding last year, I think he understood that I desperately wanted to come up with something…

Tomten & Bocken – En Slags Julshow will premieres on November 13rd, 2020 at Hamburger Börs in Stockholm and will go ahead all November and December.

Once again, Måns works with Edward Af Sillén, an award-winning director and screenwritter who wrote for The Grand Wonderland Show last year or Eurovision Song Contest 2016 among other successful shows.

Tickets will be for sale on Friday, September 25th at 10 AM CEST on livenation.se or showtic.se. – LAST TICKETS !! BE FAST!

Article based on PR & Beyond / Helene Wigren press release.

Walk With Us – A special evening with Zelmerlöw & Björkman Foundation

Spend Christmas 2019 in Wonderland with Måns